If the Rand weakens, the exporters benefit and the importers suffer. Let us remember the people. It astounds me that our Government has so many stories to tell. Every story more elaborate, more intriguing and devoid of the actual facts. Basic stories to mute the masses. A simple but favorite proposition put to the crowds is that the weakness assists exports, which filters into the economy, and in doing so offsets the higher import costs. They do not venture on to inform the public that the impact of richer exports is only appreciated by shareholders, not the working class. The ripple effect of the Rand collapsing is already being felt in many sectors, mostly imports in the manufacturing sector.

Leading indicators do not bode well for lagging effects felt by the consumer. In fact the combined effect of the rand weakness and the drought will see staple food rise by more than 40%, and this on the back of 24% average increases over the last three years. Statistics South Africa’s report on poverty trends in South Africa indicates that poor households spend 33% of their monthly budget on food. This means that the poor have to find an additional 16.2% spend capacity. With low wage increases, something has got to give, hungry people are difficult customers and not easy to persuade. Another way of truly understanding this dilemma is to look at the actual spend. Total food expenditure for poor households is R707 per month. That is an entire household. Now that very same food will cost more than R990. The underlying Graph depicts the extent of white maize inflation over the last year.

Our Government is very quick to highlight the external market forces which weaken the Rand. And whilst these are real, we and the greater masses are not told the entire story. There are both internal and external forces affecting the Rand.

The Rand is a floating currency, which allows it to be traded. It therefore derives its value based on demand factors.
Demand for our goods and services increases exports, and therefore bolsters our foreign currency reserves. However when we import more than we export, our reserves diminish, and therefore weakens the Rand.

Equally important is our domestic interest rate. A high rate will increase foreign capital flows. However if the Rand weakens, the benefit to the foreign investor is voided.

Similar to interest rates, our high quality companies listed on the JSE also attracts foreign investors, which supports the Rand.
But, when our President, changes finance ministers twice in one week, has one of the biggest cabinets in the world (3 x the size relative to the USA), entertains one of the highest corruption statistics globally, supports bankrupt state entities, and thinks everything is a joke; then foreign investors will no longer be encouraged by higher interest rates, as the political risk is just too big. This paragraph speaks not only to the President, but also to the greater Government’s lack of intent to reduce expenditure, not the inability. This further increases our current account deficit.

With a direct relationship between the economy’s current account balance and the government budget balance, we find SA in twin deficit territory. Both a rising budget deficit and rising current account deficit indicate an increased reliance on foreign debt purchases.

South Africa is unusually placed in the global market. We rely on some of the largest mineral deposits in the world to support the economy. However, when China moves its economy from a capital intensive infrastructural economy, to a consumer based economy, the prices of resources drops. Slowing emerging economies around the globe further increases the downward pressure. This leads to large reductions in exports, further weakening the Rand.

The expected growth in the US has slowed. The leading indicators such as the employment statistics and the housing market has not translated into the expected growth of the economy. As much of the emerging markets either trade with the US or receive foreign investments from the US, a slowdown in forecast growth coupled to steady inflation rise, forces US investors to play it safe and sell emerging market assets and retreat to the safety of US Sovereignty. This in turn weakens our Rand further. This massive sell off can be seen in one of our leading companies, which in Global terms has lost 63% of its value in USD over the last 3 years. 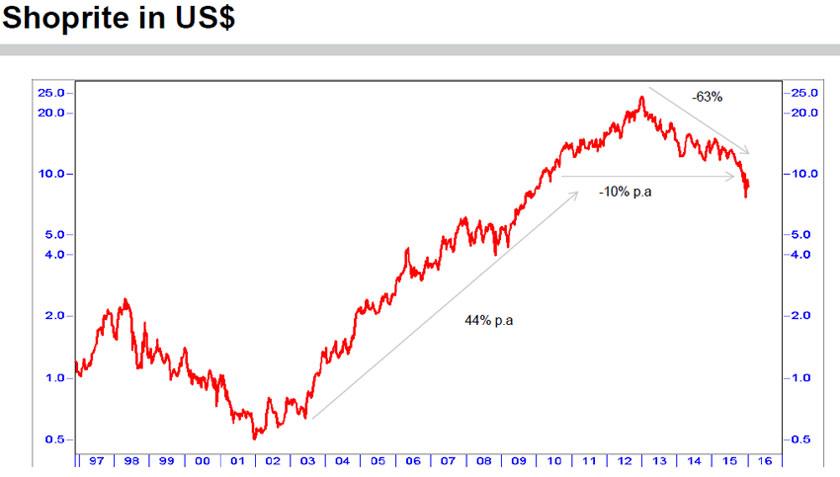 The value of a currency can be assessed using a basket of goods in another country. Usually the US. This provides clarity on the extent of the currency valuation mismatch.

Assume the Rand to be trading at R15 to the Greenback, and that all tax and import duties have been stripped out of the underlying example.

However, if it sells for R600 000, this implies that our Rand has been oversold or is below its actual value.

We do currently believe that the Rand has been oversold, with much of the force being driven by sentiment on Government, and speculators forward trading which has retained the weakness. We are however aware that our Government can do or say things which could further devalue the Rand. Either way, currency speculation is risky business in South Africa. 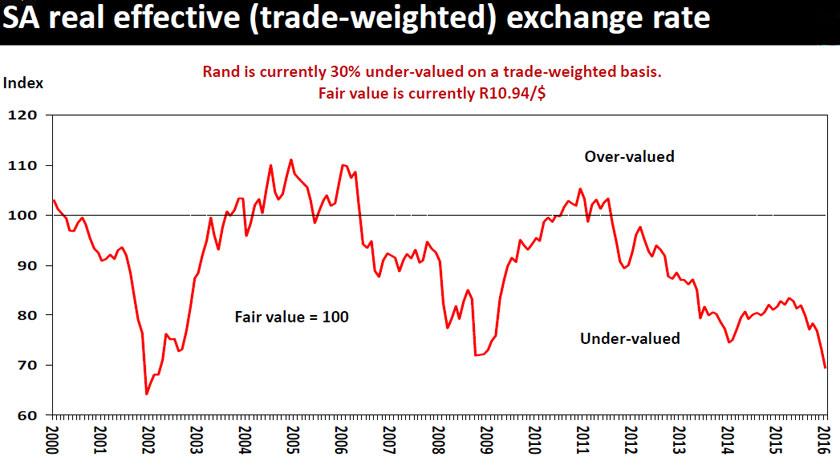 Only yesterday I received a phone call from a concerned investor about the economy, the political situation, and the consistent blunders our President seems to deliver without even trying. With the advent of many acknowledgments by the Government, we view the current Political and Economic climate as an indication of a growing pressure within South Africa to change “the rot curve”. Finally certain factions within the ruling party realize the broad need to change the fortunes of our country. After much political action, the delivery of the budget speech is probably the most important event of 2016. Pravin’s speech will be a catalyst to disaster or at least keep the ship on an even keel. We will send you a further newsletter with the highlights of the speech. We are cautiously optimistic.

Boutique Style Asset Management is a term which was coined by the smaller players in the industry when we had a flurry of new asset managers, usually breakaways, entering the market in the late 90’s and early 2000’s.

Any manager operating with a contrarian approach or a manager who used strange financial instruments was also deemed to be a boutique manager.

The benefits of being small, is that you can trade where the bigger managers are unable to, due to liquidity constraints.
However, if you do well you grow, and become a bigger manager with the same liquidity constraints. In this instance can you still be called a boutique? We believe that significant informed contrarian actions, coupled with the team’s experience, albeit with previous companies, and in some instances the ability to play in smaller markets provides for boutique styles.

After rigorous due diligence, Financial Associates has considered these facts, and as an alternative investment strategy created a Boutique Style compilation of Investment Managers and specific underlying funds. This also offers additional diversity, thus lowering your overall portfolio risk.

This strategy will be hosted by the PSG Wealth Platform and contains the following Asset Managers:
Investec, Laurium Capital, Rezco, Foord

In addition to the vanilla portfolio investments, Financial Associates has structured alternatives as extensions to your portfolio. These include:

Please contact your dedicated Wealth Manager to explore the benefits of adding the above-mentioned themes to your existing portfolio.