The chairman of the US Federal Reserve Bank, Ben Bernanke, announced in May the possible tapering of financial stimulus into the US economy. This created a panic in equity markets and more so for emerging markets such as South Africa. Investors fled to the safety of US Bonds. Mid July, Bernanke announced that the timeline of the suggested tapering was not cast in stone. Markets enjoyed the sentiment and began taking more risky assets onto their balance sheets.

WHAT DOES THIS ALL MEAN?

In shipping terms the acronym QE2 relates to the Passenger Liner, Queen Elizabeth 2. Global economic terminology also refers to QE2 which is the acronym for Quantitative Easing. This term is primarily associated with the US Federal Reserve Bank and the means of financial stimulus used to grow the economy after the credit fall out in 2009. A comparison of the two QE’s offers an explanation of the rationale for the woes of Global Economies of recent and without doubt into the foreseeable future.

As with ‘Big Ships’ the US Economy takes a while to reach its ‘cruising speed’ or in this instant, reasonable economic growth. After the credit collapse of 2009, the US Federal reserve bank formalised ways to revitalise the economy. A simple solution was to reduce interest rates creating an increase in lending. This had a minimal effect as people did not want to take on additional credit risk. Quantitative Easing then came into play as interest rates were close to zero.

A central bank does this by crediting its own account with money it has created (printed). It then purchases financial assets such as government bonds and corporate bonds, from banks and other financial institutions. The purchases, by way of account deposits, give banks the excess reserves required for them to create new money from increased lending in the fractional reserve banking system. The increase in the money supply thus stimulates the economy.

The current monthly stimulus is $85 Billion. With extremely low interest rates coupled to this stimulus, there is significant capital being borrowed at very low interest rates and placed in countries outside the US where the interest rates are higher. The difference offers a ‘free’ return. In other words, use someone else’s money to invest and make more money than the cost of borrowing that money.

It is astonishing to understand the momentum of massive ships or super tankers. Once a super tanker is up to speed it takes an enormous effort to slow it down again. A large ship cruises at roughly 35km/h. These ships can take 15km to stop or 25min. Similarly the US Economy is extremely difficult to slow down once it has gained significant momentum. Inflation is the momentum factor which would create chaos if not kept in check. It is for this reason that the US Fed is considering retracting Quantitative Easing. This off course relates to a decline in free money available for investment.

HOW ARE YOUR INVESTMENTS INFLUENCED?

Domestic exposure will lose ground as foreign direct investment slows. Foreign investors own 40% of our market, so it is inevitable that money will leave our shores. Any offshore exposure will take its cue from the US markets seeking solace in less risky assets. It justifies sentiment that whilst the long term prospects are sound with the US Economy, the near future will see volatility as we have seen in the past two months. This uncertainty also plays havoc in the market place as speculators move in to take positions which are often followed by long term investors. Ultimately, the next year is uncertain, however becomes clearer 3 to 5 years out. This leads on to the next topic..........the benefits of a Good Asset Manager

Financial Associates, in our capacity as Wealth Managers, are often asked the question of investing in Passive or Tracker Funds, similar to the SATRIX. Many investors feel that they are better off investing in a fund that tracks the market as opposed to having an asset manager charge them for a similar return. It must be stated that tracker funds also charge a fee although less than an active manager. The reality is that average asset managers seldom outperform the general market. However, great asset managers coupled with expert asset allocation will outperform general markets and more than warrants the back end fees the asset managers and wealth managers, charge for these expertise.

The underlying graph illustrates that Coronation are Great Asset Managers and certainly warrants the fees they charge. In much the same way, our expertise regarding Manager Choice and asset blending warrants annual fees charged. 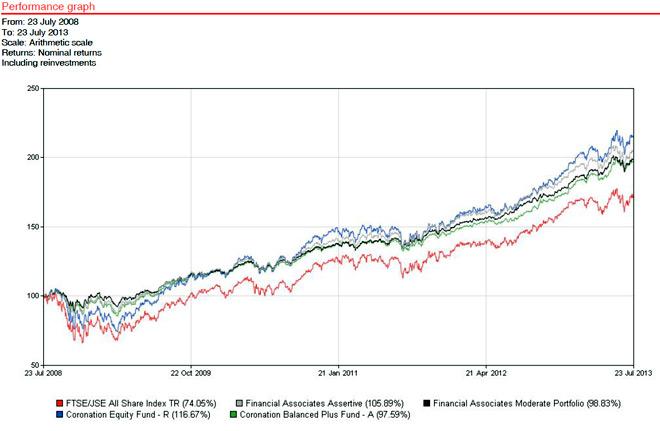 Your Personal and Family Legacy is more than simply a statement of how you wish to be remembered after you pass on. It is something that enriches your life and reveals you and what your life is about to your family, friends, and your community.

Family Wealth Management is all encompassing of the above statement. The greatest risk to your family is the management of your current assets and the structure of your estate and various entities once you have passed. Too often, we stumble upon issues, which if dealt with correctly could have not only saved a catastrophic family breakdown, but also ensured financial stability for many loved ones.