All matters considered - All considerations matter

All matters considered - All considerations matter 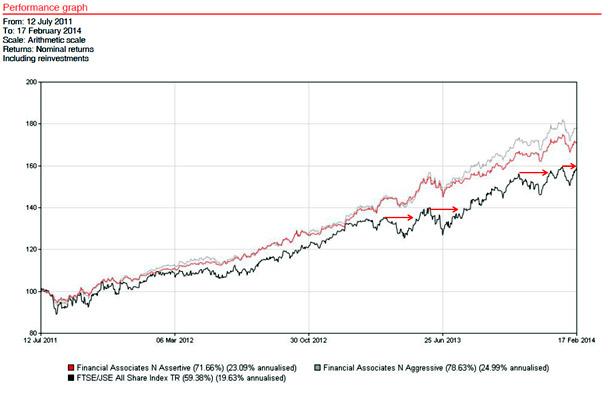 What is most important is what your portfolio will look like in a correction. By comparing our Assertive and Aggressive Strategy to the JSE All Share Index we can calculate the average participation in a downward market movement and the subsequent benefit thereof. Two critical measures emerge in this graph. The Financial Associates Aggressive Strategy participates on average in 50% of downside movement and similarly our Assertive Strategy participates on average in 30% of the downside.

In almost all instances, this significantly reduced downside participation provides market Alpha or out performance. Over the long term the compound effect of inherent risk mitigation continues to provide market beating returns, whilst at the same time providing you with greater certainty.

So many times I hear corridor talk of South Africa’s political trouble, corruption, bad financial decisions, currency depreciation, and the list continues. However, much of the outcome of a forecasting process is based on the Global climate and how that affects our economy. As a South African we usually only consider our negatives and think that all is well in First World Countries.

Another consideration of assessing the propensity for a correction is the understanding of the previous market drivers relative to current drivers. For many years our industrial stocks ruled the roost. However, due to an improved global outlook and rerating, mining stocks are now emerging after being in almost a catatonic state. Similarly large dual listed companies are benefiting from improved sentiment.

It now becomes apparent that the JSE no longer reflects our economy, but rather provides proof of our global integration. By contrast the sectors which better reflect our economy such as the retailers and food producers have been severely lagging if not limping.

Local brokerage Vestact in a recent note titled, “This smells musky”, made an interesting observation that even MTN, which is the JSE’s seventh-biggest stock by market capitalisation, could be considered to have greater international than South African exposure. As it pointed out, MTN now obtains much of its revenue from outside our borders. Only about R20bn out of the group’s R64.2bn in turnover was produced in South Africa.

Considering the fact that South African Markets do not reflect the state of our economy; it would be best to invest in companies which are geared to Global Markets.

Is a correction on the cards and if so what will it look like? With most Global austerity measures firmly in place, Global banking governance highly regulated and most of the developed and or larger economies showing overall positive signs we expect continued volatility, however feel that a major correction is unlikely. We view volatility as market movements of -5% to -10% within a rolling 6 month period. The recent January volatility moved the JSE ALSI down 5% and returned this again. A correction is a fundamental loss of investor’s value over a rolling annual period of greater than 10%. Our underlying portfolio objectives reflect this view.

Interest rates in the US are expected to increase in 2015, thus the expectation is that this would encourage an outflow of emerging-market assets in favour of those in the US. This possible outflow will negatively affect our markets. Bonds, Property and Equities will all suffer from a loss of emerging market appetite. We are already feeling the woes of using Portfolio Investments over many years to stem the weakness of the Rand. What we need is long term Foreign Investment. It is therefore imperative that any portfolio holds appropriate offshore, dual listed or rand hedge stocks.

The rand fell nearly 25% against the dollar in 2013 as investors fled South Africa and its emerging-market peers in anticipation of an eventual winding down of the Federal Reserve’s stimulus efforts.
Investors have pulled $3.8 billion out of South Africa’s stocks and bonds since the beginning of November, and the country’s current account deficit, a broad measure of its trade balance, ballooned to 6.8% of gross domestic product in the third quarter. “Article Moneyweb”

In the first section we understood that our economy is not an island but is influenced by many global economic factors. Last year, I was surprised by a petrol pump attendant who explained to me, in a most sincere manner the reasons why our currency is so weak. What surprised me most is that he had the fundamentals correct. This interaction made me think of how many times I hear educated, economically contributing South Africans, complaining about the weakness of the Rand, without understanding the fundamental drivers of currency. As with any asset, the value is determined by supply and demand. The supply and demand in a currency is dependent on the market participants such as importers and exporters, foreign investors and speculators.

Where there is more demand for USD than supply the exchange rate will adjust upward, until the excess demand relatively is eliminated, thus weakening the Rand. There have been numerous factors influencing the recent weakness of the Rand. The most obvious ones include US change to interest rates and the tapering of economic stimulus, and domestically, political instability pre-elections and the structural balance of payments deficit. With the US Economy anticipated to continue moderate growth, interest rates are forecast to increase. Therefore the risk/return payoff associated with investing in South Africa is reduced. Similarly the ‘free money’ available to stimulate the US economy will be retracted over time. This affects the input costs and turnover capability of companies on the JSE. In both these scenarios investors will sell their South African held assets, thereby reducing our foreign reserves. In much the same manner, political instability concerns investors, which in turn sells local assets.

This results in a structural imbalance. For many years we were fortunate that net investors assisted the value of the currency by consistently providing foreign currency to our balance of payments account. This offset the disparity of higher imports to exports and artificially supported currency strength. With the advent of the recent US stimulus retraction, political instability and stable global economic forecasts, South Africa no longer has this offset factor and our currency therefore weakens.

Taxation Laws which will affect your planning

This Act was promulgated on 12 December 2013. The most pertinent amendments to the Income Tax Act that is relevant to personal financial planning is summarised in this document and, unless otherwise stated, will be effective from 1 March 2015.

This section infers the following requirements for the exemption to apply

The employee will be entitled to a tax deduction equal to 27.5% of the greater of:

If any contributions have not been deducted at the date of retirement, that amount can be offset against:

Section 10C comes into operation from 1 March 2014. It determines that an exemption shall apply in respect of the aggregate of compulsory annuities payable to a person, equal to so much of the person's contributions to any pension fund, provident fund and retirement annuity fund that did not rank for a deduction against the person's income.